We’re at a critical juncture in the development of solar as a source of clean energy for the commonwealth. 2015 saw the introduction of four different solar bills to the Massachusetts legislature, each intended to expand the existing net-metering cap (of approximately 1,000 MW) and/or restructure the method by which distributed solar generators are reimbursed for the energy they send to the grid.

Each of these bills has a different emphasis, ranging from simply expanding the cap and keeping net-metering compensation the same (basically at retail rates—the rates we pay on our utility bills), to expanding the cap while imposing minimum bills and slashing net-metering reimbursement to average wholesale rates (the rates utilities pay for the energy generated by power plants). According to National Grid, moving to wholesale rates would drop net-metering compensation from about 19 cents per kWh to 4 cents, a 79% reduction in compensation.

This depends on your perspective—which itself is part of the problem. The one concrete issue that all parties (appear) to agree on is the need to expand the current net-metering cap. The cap has already been reached in National Grid territory and there’s no clear consensus on what to do about it. This is limiting new investment in solar projects, which in turn has a negative impact on jobs, carbon emissions and energy production. Although the issue is extremely complex, there is one dynamic underlying all the consternation: Solar installations in Massachusetts are growing exponentially.

The incentives intended to spur growth of the solar industry have worked—solar capacity in Massachusetts has grown over 89% per year (on average) over the last 5 years. This is alarming utilities, which see this growth as a threat to their stable and profitable business model. The state had 841 MW of installed solar capacity as of May of 2015, growing rapidly from a paltry 41 MW in 2010. If we assume 20% annual growth going forward, the state will reach its goal of 1,600 MW of installed solar capacity by the end of 2018—well ahead of the current 2020 target. 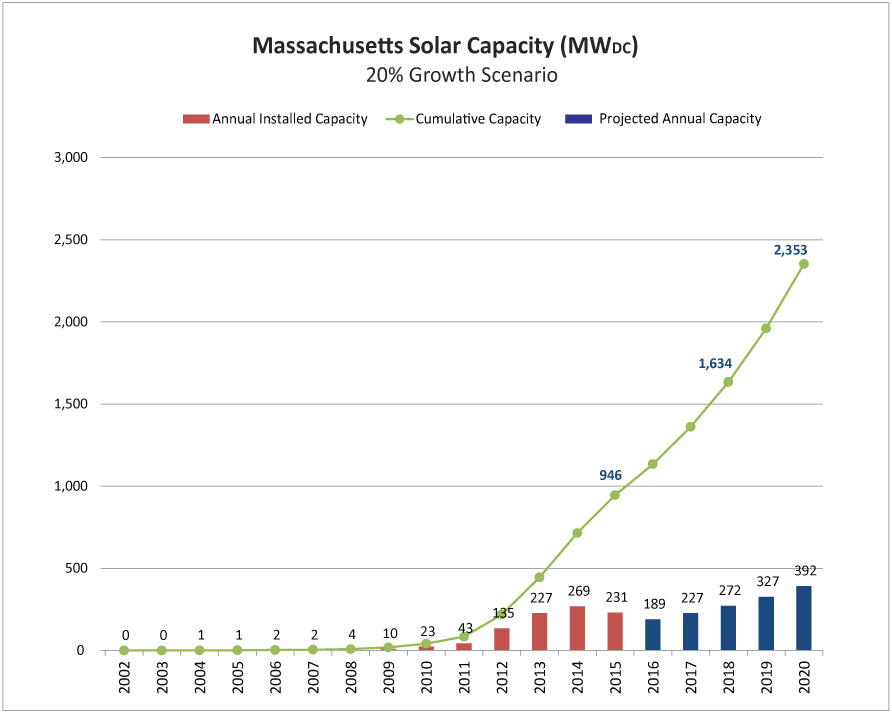 Of course if the cap is not lifted, growth will stop completely. That’s unacceptable from a climate perspective—we need just this type of growth in renewable energy generation to have any hope of avoiding catastrophic climate change.

And the real problem isn’t growth, it’s the uncertainty that comes with rapid growth or change. Can the grid handle significant distributed generation? Who will pay for necessary grid enhancements? Will storage allow us to use solar energy more effectively in the future? What will happen to electricity rates for non-solar ratepayers?

These uncertainties point to the need for a better understanding of the value of solar and the costs of using the grid over time. Solar generators do not currently pay distribution charges for grid use, which is an understandable concern for utility companies given the rates of growth we are seeing. A comprehensive and public study should be conducted in order to determine the true value of solar, which is dynamic and will change over time as solar capacity increases.

The uncertainties associated with rapid solar growth have generated a knee-jerk reaction from utilities: kill the growth. Utility companies in Massachusetts see solar as a threat rather than an opportunity (apparently they fear change as much as the rest of us), and have decided that the way to address the threat is to smother its growth. And it’s not just Massachusetts; we’re seeing similar activity to slow or stop solar growth in many different states. This national attack on solar net-metering has been initiated by utility companies and fossil fuel interests that see renewable energy as a threat to their profits and business.

Solar growth is good for the citizens of Massachusetts, the climate, and ultimately the utility companies (although they may not see this yet). Several studies show that solar provides benefits to both the electric grid and society that far exceed the retail net-metering rates received today. However, utility companies will need to be compensated for the grid services they provide to distributed solar generators if this growth continues. And the growth should continue, just not forever. It’s not physically possible or economically practical to maintain these growth rates indefinitely, and eventually the value of adding solar to the grid will decline as solar penetration increases. Fortunately we’re a long way from having to worry about an overabundance of solar on the grid.

Any legislation enacted must expand (or better yet remove) the net-metering cap and continue to compensate and incentivize solar adequately. Let’s hope that solar advocates and the utility companies can come to an agreement that will prevent the collapse of the solar industry in the state. Moving to a wholesale rate without grandfathering existing systems is killing solar in Nevada, where solar companies are leaving the state in droves after a change to wholesale net-metering compensation.

We should thank Nevada regulators for showing us what will happen if we drastically reduce net-metering compensation in Massachusetts, and it’s clear we don’t want to follow Nevada’s lead if we hope to meet the greenhouse gas reduction requirements of the Global Warming Solutions Act. We’re at a key decision point for the state: do we want carbon-free solar to become a central component of our future electricity system, or do we want to extend our reliance on the fossil fuels that scientists tell us we must stop consuming?

Author’s note: The graphs in this post were updated on January 29th 2016 to reflect better estimates of 2015 solar installation data and a 20% growth rate.